The very presence of SADC’s official representation in the 15th Congress of Polisario Front, held from the 19th to the 23rd December in the liberated territory of Tifariti, Western Sahara, is a strong message and a clear expression of support to the legitimate struggle of the people of Western Sahara, under the leadership of Polisario Front and the Saharawi Republic.

By attending the Congress of the Polisario with an official representative, SADC wished to reiterate its “unwavering support for the realization of Saharawi people’s inalienable right to self-determination, consistent with the UN Charter and the AU Constitutive Act,” Mr. Jevin Pillay stressed.

SADC, he added, will “remain unequivocally committed to the cause of the people of Western Sahara until the achievement of a proper and peaceful solution that meets your aspirations and will”.

The representative of the SADC also delivered an official speech during the opening session of the Polisario Congress on Thursday, recalling the principled position adopted by the SADC 2019 Summit, after the holding of the first Solidarity Conference with Western Sahara by the organisation last 25-26th March 2019.

“The very organization of the Conference of Solidarity with the Saharawi struggle was and, still is a clear message from SADC to the international community that African leaders and Nations do not accept the persistence of colonialism and occupation in Africa,” Mr. Jevin Pillay said.

On another hand, Mr. Pillay affirmed that his organisation is concerned about the UN Security Council’s last resolution adopted on October 2019, which “seems to have complicated things and made a lot of friends of the Saharawi people more worried again,” he regretted.

“In fact, the comprehensible position adopted by South Africa in the Security Council against the adoption of that resolution along with Russia, says long about the feeling of all lovers of peace and freedom in the continent, including SADC, which continues to believe that the persistence of colonialism and illegal occupation in Western Sahara is unacceptable,” Pillay confirmed.

On the human rights issue, Mr. Pillay affirmed that SADC is “deeply concerned with the serious Human rights abuses and high scale plunder of the natural resources of the territory, and we are appealing to the UN to ensure the protection of the people of Western Sahara, under Moroccan occupation, from all sorts of abuses.”

For that end, SADC “calls for the full respect for international human rights law in the occupied territories of Western Sahara, and urge the United Nations Security Council to include a Human rights monitoring mechanism within the MINURSO mandate”, and to continue on the other hand to “provide humanitarian relief to the Saharawi refugees” without any sort of political weaponizing of this aid,” he said.

SADC further appeals “to Multi-Nationals, countries and companies to “refrain from any further exploitation of Western Sahara’s natural resources”. The exploitation and plunder of the resources of the occupied Saharawi territory is shameful, illegal and immoral, and it must stop.”

And therefore, the organisation “calls on the UN and the AU to immediately put in place a monitoring mechanism aimed at stopping the exploitation of Western Sahara’s resources, in line with its previous resolutions and decisions.”

Polisario Front’s Congress is taking place from the 19th to the 23rd December 2019 in the liberated zones of Western Sahara, with the participation of 2400 delegates. (SPS) 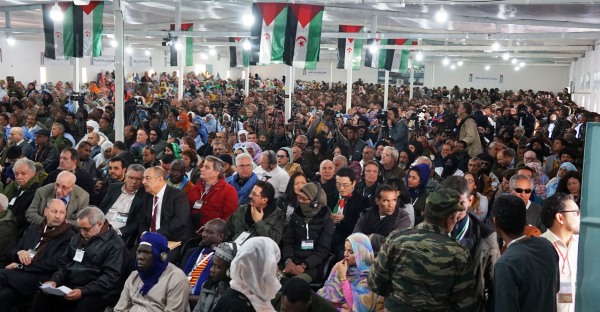